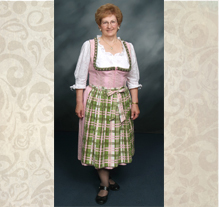 Frankenmuth is one of the top tourist destinations in Michigan. There are a great number of things for you and your family to do in Frankenmuth. With more than a dozen festivals each year, Frankenmuth welcomes visiors with Bavarian hospitality regardless of the season. From world-famous chicken dinners and the largest Christmas store in the world, to world-class golf, there is a definitely something for everyone.

Frankenmuth was founded in 1845 by a group of fifteen German-Lutheran missionaries who came to this area for the purpose of teaching Christianity to the Chippewa Indians.

FRANKEN means the area where the settlers came from and MUTH means courage in German. "Courage of the Franconians" is what Frankenmuth is today. It is a thriving city of nearly 5,000 residents who take great pride in their German heritage. The German ethnic is portrayed in the city's architecture and well-tended flowers and lush greenery.

Let me uncover the story of how Frankenmuth became "MICHIGAN'S LITTLE BAVARIA" and see all of the must-see attractions.

“Judy's Travel has been our agency for 3 European trips and 1 U.S. bus trip. Judy is very knowledgeable and thorough in her planning the trips for everyone's enjoyment and needs. We have enjoyed each trip and highly recommend her agency.”

“Judy is a very experienced travel leader who offers custom made reasonably priced trips. I have enjoyed several German trips with her as she speaks German and knows the country. Her trips are well planned, well scheduled, and enjoyable. She is also helpful with planning travel anywhere.”